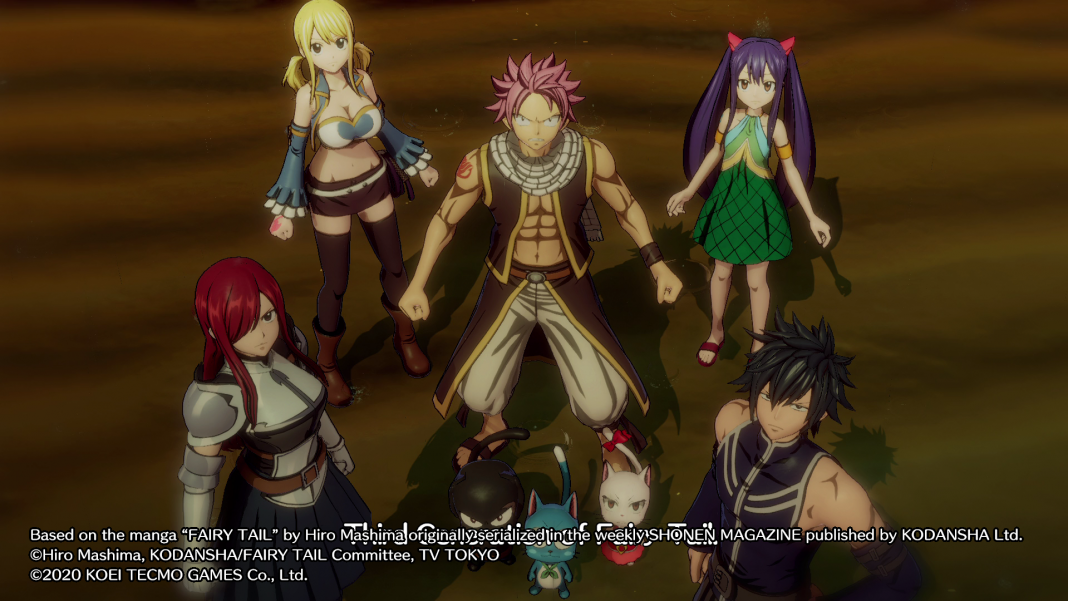 Over the years, we’ve had so many mediocre games based on anime licenses like One Punch Man: A Hero Nobody Knows, One Piece World Seeker, and more that fans of any anime or manga are always skeptical when a licensed game is announced. However there have also been some great games based on anime and manga properties like Dragon Ball FighterZ and Fist of the North Star: Lost Paradise but when you mention a game based on an anime or manga, people immediately assume mediocre arena brawler these days.

At this stage, I’m always interested in trying out games based on anime properties that actually do justice to the source material. Attack on Titan 2: Final Battle is the closest to that for me and Koei Tecmo’s newest game based on an anime or manga Fairy Tail, almost manages to deliver but is held back by some annoying issues. Fairy Tail from Koei Tecmo and Gust is a turn-based JRPG based on the Fairy Tail anime and manga series by Hiro Mashima for PS4, Nintendo Switch, and PC.

For Fairy Tail, Gust has clearly taken its own strengths with the Atelier series and delivered a game that feels like an Atelier game with changes made to incorporate Fairy Tail characters and some gameplay changes. This has resulted in a lot of repetition with the structure of quests and their requirements but this is still miles above a generic arena brawler because of how well everything comes together.

While you can play this as a fan of Atelier games, Fairy Tail assumes you are familiar with the source material. It starts off with a grand battle that serves as the game’s tutorial as you control Natsu Dragneel. This covers the “Tenrou Island” arc of Fairy Tail. After that’s done, you get into the real game and try to bring your guild back up to greatness after being relegated to the bottom of the ranks with your friends. Barring the initial tutorial that covers the aforementioned arc, the rest of the game deals with the “Grand Magic Games” and “Tartaros” arcs with some original story content.

The core gameplay loop consists of taking on requests, interacting with characters in and outside the guild across the city, exploration, and combat. The requests are usually basic fetch quests or combat quests. The game has a few gameplay systems like you trying to raise character levels, guild rank, crafting equipment to boost stats, and more. On paper, a lot of these systems sound like busy work and padding, but they work well together and remained fun throughout. I enjoyed just clearing out every request that showed up for the guild in-game. The crafting involves you using materials found after combat and from gathering to create lacrima. Lacrima are basically accessories to equip. More slots unlock as you raise character ranks and your own levels.

Your own guild also has a few key areas that can have their own upgrades and requirements. Upgrading these will let you gain more requests, craft more, and buy more items. Initially, Fairy Tail throws a lot at the player in terms of things to keep track of but just like in a good Atelier game, you will eventually get into the flow and it’ll click.

Combat is turn-based but it uses a grid-based system for skills and enemies. All your skills have their own area-of-effect and this is important with how battles play out because the enemy positions are grid-based. The skills have their own flashy animations and look very nice and stylised. Some skills that involve other characters helping sometimes look a bit cheap since only a portrait is displayed as opposed to a character model.

Visually, Fairy Tail is a mixed bag. Character models and costumes look very good but the environments are very inconsistent. Even the area outside the guild is full of very low quality textures on walls and rocks. The art style almost manages saving the overall image in the dungeon-like areas but this doesn’t look as good as even some of the older Atelier games. The main hub area is nice and open but it suffers from a few of the same visual issues.

For audio, Fairy Tail only has a Japanese voice option. The original anime voice actors have reprised their roles here which is good. Considering bigger anime games like Attack on Titan didn’t get an English dub, I wasn’t even expecting one here. The music here doesn’t use anything from the anime but it includes an original score. The tracks sound like they fit the anime well and even the guild music and battle music you hear a lot loop well and never get annoying.

Barring the visual issues, performance on Nintendo Switch isn’t good. On PS4 Pro, there are instances of noticeable frame drops but they never get as annoying as a majority of the game is on Nintendo Switch. Details for platform-specific technical differences and performance are here and here.

Overall, Fairy Tail is a competent game for fans of the show. It isn’t as good as it could’ve been seemingly due to budget constraints with visuals and Gust can do a lot better in general given how good Atelier Ryza looks. My time spent in Fairy Tail was great and there’s a lot to do if you enjoy the Atelier series post-game content. If you’re a fan of the manga or anime, this is definitely worth getting when it drops in price a bit. It does a lot right like making multiple systems work together but overall feels lacking given Gust’s recent output.